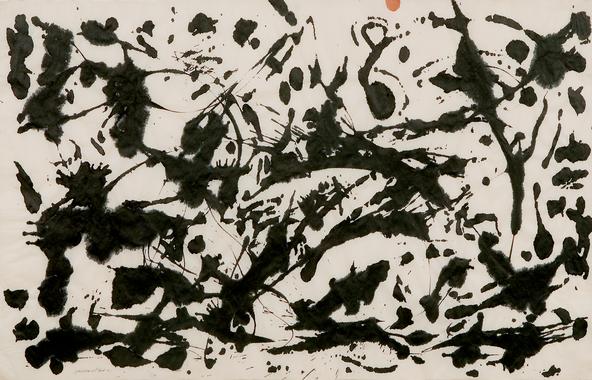 The Washington Art Consortium is pleased to be part of the “Jackson Pollock: Blind Spots” exhibition, which premiered at the Tate Liverpool on November 11, 2015 and is currently on exhibit at the Dallas Museum of Art (DMA) through March 20, 2016. The exhibition title references the twenty-eight paintings titled Number 1 to Number 28 Pollock created in 1951, which along with his paintings from 1952 and 1953 have had very limited exposure over the years; they can be considered a blind spot in a career that is otherwise very much in the public eye.

Number 3, part of the Consortium’s collection, is one of the few of this series created on paper. Curator Gavin Delahunty says in the exhibition catalog, “To gain creative momentum, Pollock had started to work on an absorbent Japanese paper as a fast and instantly gratifying exercise. The penetrable quality of the paper…was later signposted by Ben Heler as having ‘led to and/or accompanied Pollock’s idea of working with unsized duck in the black paintings’.”

Although the black paintings were met with unenthusiastic critical review when they debuted at Betty Parsons Gallery in NYC,

“[they] indicate the extent to which Pollock’s paintings were conditioned by the psychic and the performative characteristics of their making, laying bare his masterful ability to regulate line. They tested his eye/brain/wrist nexus to the limits of its capacity, in that a misguided gesture could not be concealed, as was possible in the all-over paintings. The altogether more rigorous flow of paint in the black paintings has no darkness in which to hide…In their instability, complexity and appearance, the black paintings rejected a hegemonic high culture that could not keep up with this restless artist.”

"Blind Spots", the first exhibition in over thirty years of the black paintings series, is comprised of loans from various US, Asian, and European collections, and works from the Tate and DMA. The exhibit gives context to give the series by including some of Pollock’s paintings and rarely-shown sculptural works created between 1947 and 1949. We are honored to be part of this historic exhibition.

“Looking Back: Photography in the ’70s” at the Western Gallery