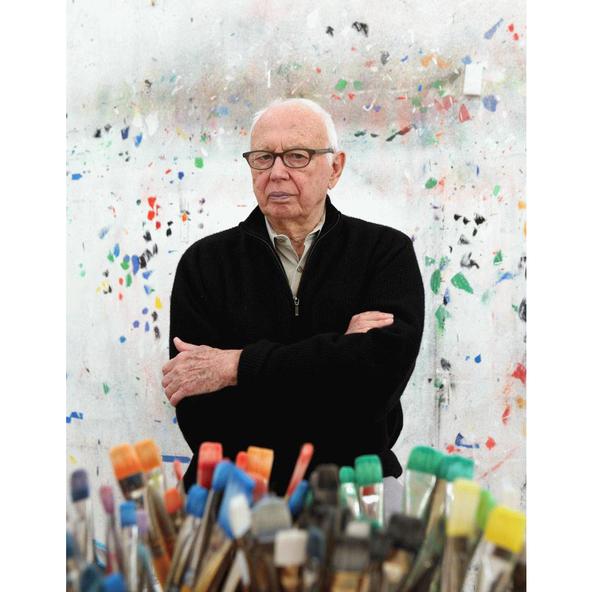 Photo courtesy of The Fox is Black 2015

Kelly was a true pioneer of the post-war art world, to the point of one of his works being rejected from a group exhibition on the grounds that it was ‘not art.’ His critically successful early works were of brightly-colored multiple panels, and before long he was exploring how various non-rectilinear forms for the panels influenced his artworks.

While he did not adhere to any one artistic movement, Kelly was a vigorous influence on the development of Minimalism, Hard-edge paining, Color Field, and Pop art. His work also inspired many post-war graphic designers with his bold colors and compositions that include the space between the viewer and the work.

This interest in the viewer’s experience beyond visual effects can be traced in part to Kelly’s fascination with architecture, which developed during his time studying at the École nationale supérieure des beaux-arts in Paris after the war. His experience as a camouflage painter with the “Ghost Army” during the war can also be seen in the development of his work throughout his career.

An aficionado of silence, and time spent alone, Kelly’s subject matter of plants, leaves, and flowers give evidence to his love of ornithology (a gift from his Grandmother) and his love of the illustrations of John James Audubon.

“I think what we all want from art is a sense of fixity, a sense of opposing the chaos of daily living,” he said. “This is an illusion, of course. What I’ve tried to capture is the reality of flux, to keep art an open, incomplete situation, to get at the rapture of seeing.”

The legacy Kelly leaves us is a unique synthesis of his pragmatic training in design, subterfuge and patience, as well as the classical arts training of the Old World. Coming of age in a time of great innovations gave him the freedom to continue to follow his own path, and to be recognized for it.

WAC Announces a New Life for Our Collection